Compared to what was 12 years ago to the present day mobile phones have become ubiquitous everywhere. They have almost become an integral part of our lives. New features and hardware have been added to the mobile phones such that they have evolved from conversing machines to full fledged computing systems. Recently AR integration, fingerprint scanner, facial recognition etc are some of the most cutting edge technologies that have been introduced to mobile devices. Only time will tell what more technologies and trends will dominate in the mobile market in the future. That being said here are some of our predictions of what the future of mobile app development will be. 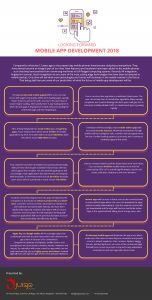 Through Accelerated mobile pages(AMPs) users can now access web pages very quickly. AMPs aid in loading pages quickly, reduce bounces, get more traffic, increase CTRs and enhance search engine ranking. Alternatively there is lazy loading which is when the web page is displayed as it loads instead of loading the entire web page and then displaying it.

Users can store their app data in a dedicated cloud server. The user can instead store or install other apps/data. When enough companies use cloud technology into their apps it will give rise to enterprise mobility. Mobile traffic on cloud based apps is growing rapidly.

AR is already integrated into social media apps and gaming apps. As per Statista there will be about 5 billion AR mobile applications by 2019. AR market will be around $120 billion while VR’s will be around $30 billion by 2020.

Smart watches and other wearables have grown phenomenally. Many of these devices give standalone features but still they need support from mobiles. iOS and android applications will increasingly create applications that synchronize and integrate with wearables. In 2014 there were around 29 million wearable users and in 2018 it is predicted to reach around 172 million.

Internet connected devices will be all pervasive in the near future. Cisco estimates 50 billion mobile devices to be internet connected by 2020. IoT will be significantly be used in real estate, education, healthcare and more domains.

AI will be massively integrated into the apps developed by the companies as it is known to enhance productivity and lower costs. Customer service has been automated via chatbots etc and healthcare and automobile industry also have been significantly impacted. Chatbots will replace 85% of current customer service by 2025. ¾ of all employees working with enterprise applications will use AI personal assistants to boost their productivity and efficiency by 2019.

Instant apps will increase in future and can be currently found in some android apps where the users can download the apps without actually downloading it. Only the required content will get downloaded and the apps will function exactly like native apps in this regard without taking much storage space also.

Apple Pay and Google wallet will increasingly replace the credit/debit and bank account transactions and customers will get used to it because of its convenience.

Compared to desktops and laptops, mobile devices and smartphones are more prone to hackers attacks, malwares and viruses. So naturally it will create a need for apps which are not only functional but also are highly secure and robust. Android apps will try to catch upto iOS apps in terms of security and robustness.

On-demand mobile apps will dominate the app stores which make users’ life easier because they are convenient and provide service to almost anywhere. Uber, Amazon, Flipkart, Swiggy, Zomato, Justdial, Myntra etc are some of the on-demand apps that will more or less be present in any tech savvy individual’s smartphones and such apps will only increase.

These are some key trends that are bound to happen in the mobile app development arena. The increasing security of mobile apps is the trend that will be the key reason for the development of robust mobile apps in the coming future. Things that previously required laptops and computing systems can now work in mobile phones and apps also.