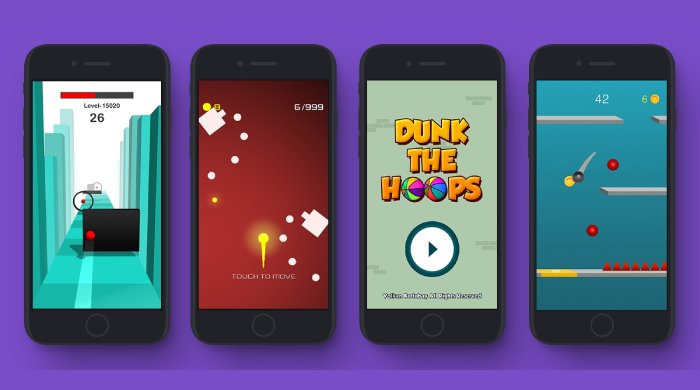 Technology has taken the world by storm and our lives are now incomprehensible without them. Our growing dependence on gadgets for most of our daily activities, especially our mobile phones and apps has transformed them into one of the most successful and lucrative markets.

The market size today consists of hundreds of billions of dollars. And mobile games make a significant part of this business, and this is expected to go beyond $91.2 billion by 2021. In recent times, casual and hyper casual games have shown massive growth; they have done so much better than other genres in the top App store and Google Play Store. Fascinating isn’t it?

So what makes these games so successful? And where do we see hyper-casual games in the future?

Hyper-casual mobile games are games with very simple mechanics that allows you to play instantly. Like, ‘Tap to play’. Hyper casual mobile games are engaging, replayable, and very addictive. There is no need for any sort of tutorials, thus making its simplicity the key factor along with a minimalistic UI, its ready-to-play feature offers an amazing user experience.

Hyper-casual games have shown immense growth in the gaming industry and have had many gaming experts think if this is going to be a tenable trend as players have accepted this new genre wholeheartedly.

It was stated in one of the seminars that were held with several industry experts, that hyper casual games will continue to succeed in the gaming industry.

Let’s take a look at.

Top 5 Reasons Why Hyper Casual Games are a Profitable Investment:

It’s very easy and simple to play hyper casual mobile games and the players get to know his/her goal at the very beginning of the game, unlike other complex games.  These games have a wider audience as they have a very low entry barrier. Thus, letting non players have an easy go with the game.

Advertising helps hyper casual mobile games generate a good amount of revenue and this is not from the in app purchases that some players might hesitate to pay. These games require only a few resources to get the games live, thus making it very simple and low costs when compared to other games. Hyper casual games can be built, released, and emphasized very easily.

1. Acer of Other Categories

It is encouraging the majority of game development companies to focus on this genre.

2. A Boon for Publishing Business & Collaboration

Hyper casual mobile games cannot rely on one single tile; it requires a big room of games, which in turn requires excellent creativity by developers and very good publishers. If the new titles are consistently published the developer will see a huge success wave.

Their themes usually consist of geometric shapes, and sports patterns that are easy to grasp, thus making them universally familiar to all sorts of people no matter their age groups, gender, and cultures.

Unlike complex games that have a goal set and once achieved. ends. It leaves the player with no motivation. On the other hand, hyper casual mobile games have no end. The levels increase with deadlier challenges retaining the excitement of the game. They come with additional elements such as upgrades, new characters, new locations, more equipment, boosters, and many more. And the best catch in a good hyper casual game is that it includes in-game currency like coins that can be used to buy new features in the game.

Thus, making it a profitable investment for developers, publishers, and gamers.

Hyper casual games convinced the world that it’s a genre but on the contrary, it is a business model. 95% of such game banks on the ads for revenue, providing profits to ad networks and other affiliate partnerships. But hyper casual games are free to play.

The ads experience and mechanics put together generate super fast simple games that attract a massive group of people. Many indie game developers developing HTML5 games in this genre to earn high profits.

Hyper casual games will continue to feature 1 in 5 in the top 100 charts.

Better and broadened mechanics will blend with the hyper casual business models to include elements of progression, idles, social, and goals.

Developers who fail to focus on ad viewing and simplicity will fail to grow. Developers and ad networks need to work hand in hand to build a successful ad tech genre.

The hyper casual gaming industry will continue to rise as long as they maintain simplicity, and this defines the game’s ultimate sophistication.

Gaming industries will surely choose to develop simple hyper-casual games instead of wasting all their time and resources on one big complex game. Hyper casual games will never lose their charm and players will always keep choosing them. The games serve as a pleasant, stress free past time attracting challenges of beating one’s own score or the other highest score.

For example, Juego studios have introduced a few mobile games focussing on the simplicity of hyper-casual games. They are a leading and one of the best technology companies that specialize in Game development, Augmented Reality and Virtual Reality.

Hyper casual games promise better revenue than a single complex game and that’s what a good gaming industry would want.