The following write up is about Unity Light Baking for realistic output which can be mainly used for Virtual Reality based products that work on Oculus Rift based apps.

When the models are ready to be exported to Unity we have to check the UV Channels. So I created UV-Map_1 for Diffuse texture and UV-Map_2 for Lightmap.

The UV map for Lightmap can be created by selecting the model and giving an Automatic map (Either in Maya or 3ds Max). This is done so that we don’t get uneven UVs in Unity’s auto-generated method. 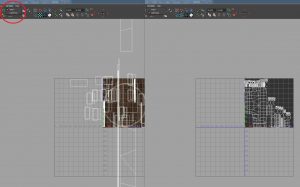 Once we are ready with this scene, we will export in .fbx format and import in Unity.

Pro Tip: While importing into Unity, go to import setting and in the materials, tab goes to ‘Material naming’ option and switch it to ‘by Model Material Name’, so that the material’s names that were given in Maya will be imported into Unity.

After this step, we will have to check all the models as ‘Lightmap Static’ in the Lightmap Tab (This can be found in WINDOW tab). Change the values in ‘Scale in ‘Lightmap’ to lower values as per the model’s size in the scene and UV map.

Pro Tip: Smaller objects get lesser value than the larger models. This helps in reducing the number of Lightmaps as well.

Shown below are the Light map settings for a model. 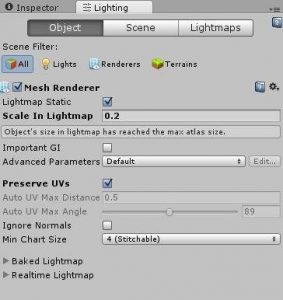 In the Light map tab, we have to do some settings in the ‘Scene’ tab to get the desired output. We went with the following settings shown below.

A baked resolution, Baked Padding and Indirect Resolution can be reduced depending on the quality needed. Lesser the value, lessen the quality of light and shadows.

The time taken for Lightmap generation is going to be affected by the above changes. For us, it took roughly about 10 Hrs.

Pro Tip: If there are any metal models in the scene, they can be kept out of the lightmap static option. Just disable the Light map Static option in the Light map tab. Apply a cube map to the metal/Steel model to give shining effect.

Pro Tip:  You can Light map the scene with single directional light, but this isn’t sufficient to get the light inside the rooms. So you can place are lights at the windows and point lights in areas where light is not cast properly. 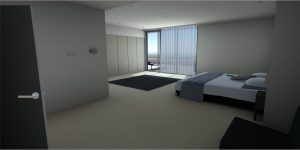 Challenges faced:
Getting the Light map count lesser, while keeping the quality at par was one of the major challenges. We had to Lightmap multiple times for the same, with different settings.

There were few glitches in the model’s UV maps which showed up after the Light map was completed. Getting these glitches rectified required some time which hampered the time to create the Lightmaps.

Game development in Unity 3D will be definitely fun,easy and challenging. All you need is, comprehensive knowledge of the unity engine.