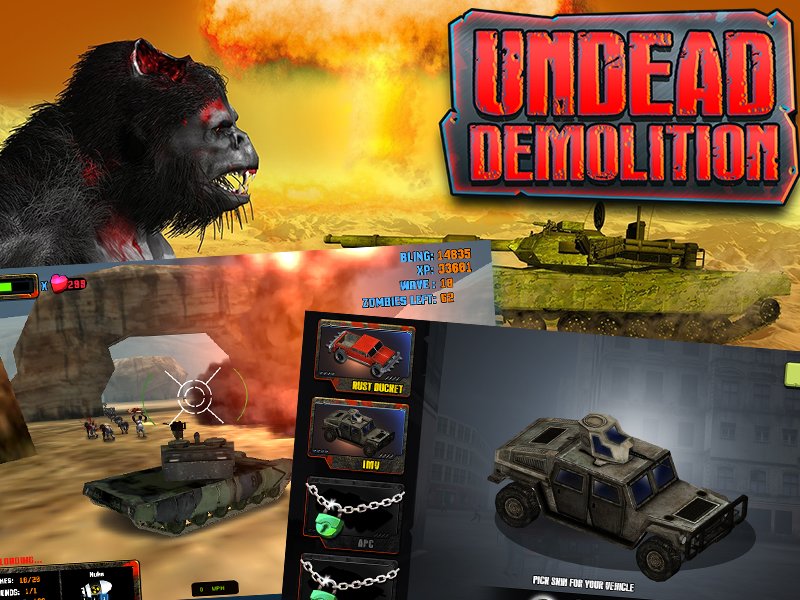 Get tired of killing zombies? Then come and play Undead Demolition and enjoy an enticing zombie safari experience. This game is set in a dystopian post-apocalyptic world where the world is a massacre of zombies. This is post-Apocalyptic Zombie Horde Unity 3D Survival Game which combines military grade weapons and zombies in an arena style battle. Unlike the most other horde survival games where you would face off with trivial handheld weapons, here you’ll have access to vehicles including military and civilian.

As soon as you’ll enter the world of Undead Demolition, you’ll be amazed by the gameplay and the graphics and there are three different environments (downtown, seabed, and carter) to explore. You’ll also be having multiple cars and weapons including military-grade heat-seeking missiles and atomic bomb to trash the zombies. You can earn whenever you’ll kill a zombie. You can purchase many items for a game such as gold, multiplicator cards, lives, nukes and especially the vehicles as well. These vehicles had been designed with the Car physics which boosted its architecture.

Playing this unity 3D survival game involves a thrilling experience. You really need to take a nosedive to avoid the zombies latching onto you. The other interesting thing about this game is the way combat works. Instead of being a dual-stick shooter or handling combat in a way that has a ton of action, it plays closer to something complete with action points and turns. In short, to survive you need to kill as much as zombies you can, even the vehicle tank is stand-off weapon to firepower.

Take a moment to look at our Undead Demolition portfolio and see how we have achieved it!