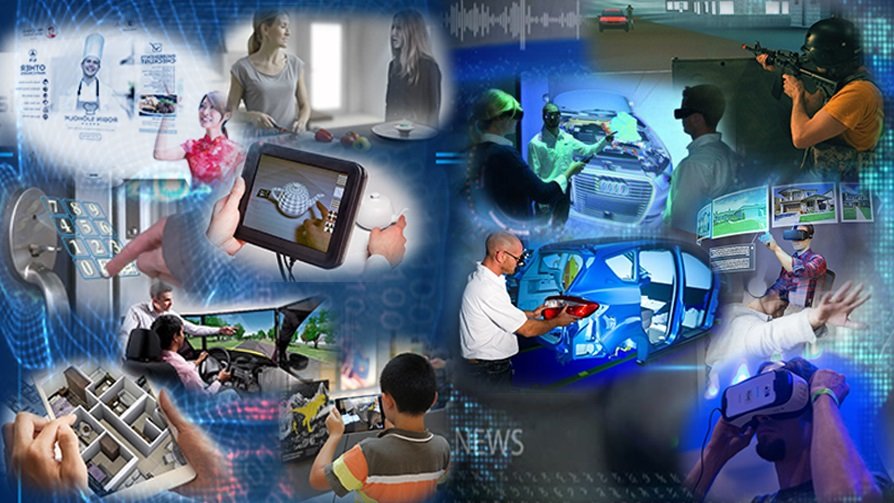 Your guide to understanding the difference between popular reality technologies

Virtual Reality and Augmented Reality are among the most discussed emerging technologies, with both terms often being used interchangeably to describe digital experiences. To the novice, the general perception is that both VR and AR involve simulated digital content and they both need some sort of peripheral device like headsets or smart glasses. However, both Virtual Reality and Augmented Reality are distinctly different technologies serving multiple purposes.

Here we explore the differences between virtual reality and augmented reality, along with a look at the devices and platforms involved in each, and the current and future applications of both of these technologies.

Virtual reality refers to a 3D computer generated digital environment with features and objects that can be perceived and interacted with in a seemingly realistic manner. The technology uses peripherals like headsets and motion sensors to allow users to experience sight, sound and sensations in the virtual environment.

The key difference is that VR technology essentially creates a completely imaginary environment for the user to interact with, whereas AR adds simulated content to existing real world views.

Popular Examples of VR and AR

Some of the well-known examples of AR technology in use are location-based games like Pokemon GO, filters on Snapchat, and shopping apps like the Ikea Catalog , all of which use smartphone cameras to place virtual objects over a real world view.

Head-Mounted Displays
VR Headsets like the Oculus Rift, PlayStation VR and HTC Vive that are tethered to external devices like PCs and consoles.

Mobile VR Goggles
Strap-on goggles that allow the user to experience VR content on mobile devices like smartphones and tablets. Popular examples of mobile VR goggles are the Samsung Gear and Google Cardboard.

Controllers and Treadmills
One can navigate virtual environments using standard hand-operated game controllers or use devices like treadmills to directly replicate physical movement.

AR:
AR uses display systems to let users view digital content, along with input systems and sensors for location tracking. Most of this hardware is available in popular smartphone models today.

Display
Head-mounted displays like the Hololens or smart glasses like the Google Glass, lenses and smartphone cameras.

Sensors
Optical sensors, accelerometers, gyroscopes and GPS(most of which are built-in features in standard smartphones) that can track the position of the user.

Applications of VR and AR
Due to the nature of the technology, VR is slightly more popular in the entertainment sector, since it allows for limitless possibilities in the creation of fantastic imaginary virtual worlds. AR, on the other hand, has the potential for use in a number of day to day processes and enterprise applications.

VR:
Entertainment
The most prolific use of VR is in the field of entertainment with games, videos, virtual theme parks and experiences. VR can also be used to enable virtual viewing of sporting events and live concerts, as well as virtual tourism.

Design
VR can be used to quickly create virtual prototypes of a range of products from automobiles to electronics and explore design options. VR simulations can be used in the field of architecture to allow consumers, architects and contractors to experience realistic views of proposed buildings and homes.

Military and Healthcare
VR simulations of high-intensity situations like combat and emergency scenarios can provide a safe way to train personnel in the military and healthcare sectors.

Business
Remote conferencing using VR technology can help businesses coordinate with teams all across the globe. VR can also be used to create life-like simulations for more effective employee training and evaluation.

AR:
While the entertainment value of AR is largely limited to location-based apps and games, the technology has a number of enterprise applications in the manufacturing, business and healthcare sectors.

Assembly and Manufacturing
Using cameras and sensors, AR applications can be used in the assembly of complex products by overlaying images and instructions onto the user’s real world view and provide ready access to necessary technical specifications.

Medicine and Healthcare
AR technology can be used to provide handy additional information on vital organs and medical conditions in real-time for doctors and medical students, paving the way for safer and more effective diagnostics and surgeries.

VR
There are two ways to create content for VR applications. The first is to film 360 degree videos using a spherical camera. Alternatively, another way of of creating content for virtual reality applications is using game engines for 3D animations. Two popular game engines in use by providers of top virtual reality game services are Unreal and Unity. VR applications for different platforms are created using specific SDKs which are unique to each platform.

Future of AR and VR

In the near future, virtual reality is poised to go wireless and portable, with more headsets using inside-out tracking to eliminate the need for external cameras. Developers are looking at building more immersive solutions using graphics with high frame rates, 3D audio technology and solutions for problems like latency(the lag between actual movement and movement in the simulated environment). VR content is also slowly expanding to include new experiences like movies and online shopping, where customers can visit virtual versions of stores to view products.

With AR, there has been a trend of more consumer-level applications lately. New smartphones like Google’s Pixel have cameras with precision tracking and enhanced depth perceptions, providing support for more AR apps. A new version of the Google Glass has also been recently released, with new modifications aimed at enterprise use.

Another interesting direction for the development of reality technology is the fusion of VR and AR. Both VR and AR have their limitations when viewed as separate technologies, but the benefits of combining their features may pave the way for a large number of applications in the future.

Mixed reality(MR) combines the aspects of VR and AR to allow users to realistically interact with virtual content like holograms, which are positioned appropriately in a real world setting. Microsoft’s Hololens, a stand-alone untethered holographic computer built into a headset explores the potential of combining VR and AR features. The Hololens allows users to see, hear and interact with digitally created holograms which are layered over their real-world view.

While this technology is still in a very early, evolutionary stage, MR might leap forward in the coming years, especially with the development of Microsoft’s Windows Mixed Reality headsets. These headsets are reportedly going to be priced affordably and developed for Dell, Acer, Lenovo and Asus. The affordable pricing might drive better consumer adoption, paving the way to a future where both virtual reality and augmented reality applications are accessible to all.