Since we are into game development, Juego Studios continues to push the envelope of the video game industry in terms of storytelling, gameplay, and graphics. While developing the video games for Playstation, The most compelling part is the character. Whether it is a hearty plumber or battle worn grunt, the colorful stars of video games have become emblems of the games. Let’s take a look at some of the popular PlayStation video games heroines which we have always cherished for.

The Heroines of Gaming Industy

Ellie, a fictional character in the 2013 video game named The Last of Us, lost her mother at birth and grew up in an orphanage and played as the protagonist of The Last of Us: American Dreams and The Last of Us: Left Behind. The game portrays this fourteen-year-old survivor, Ellie as mature beyond her years despite the circumstances of her environment. On the other hand, we can see Lara Croft, the main protagonist of the eponymous series, as an enigmatic character. She is represented as a beautiful, intelligent, and athletic English archaeologist-adventurer who ventures into ancient, hazardous tombs and ruins around the world. Not only these, but there are also many other major icons like Aloy, Jade, Clementine and Chie Satonaka.

With those specifics now out of the way, check out our infographics. 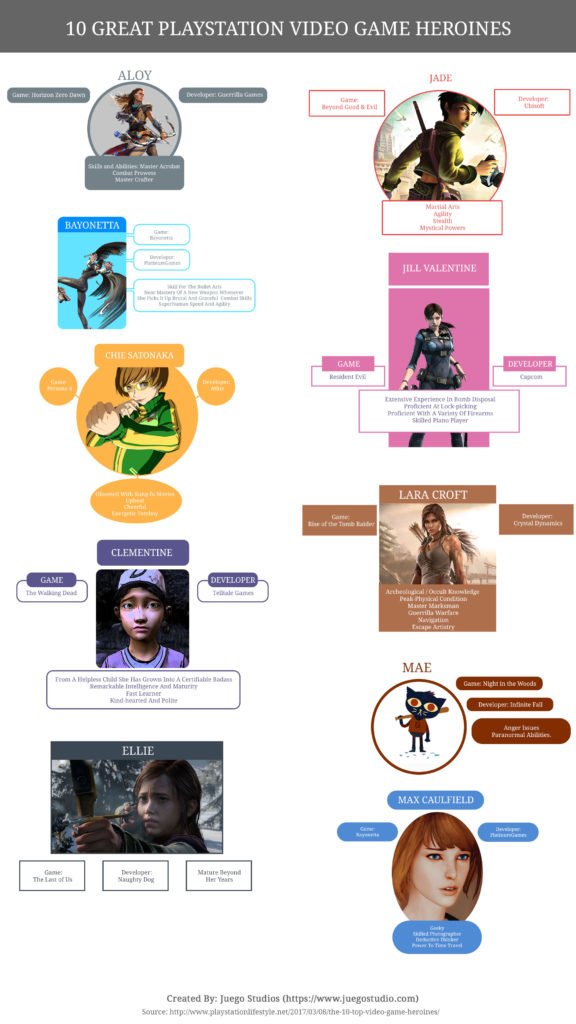 Want to share this image on your site? Just copy and paste the embed code below: