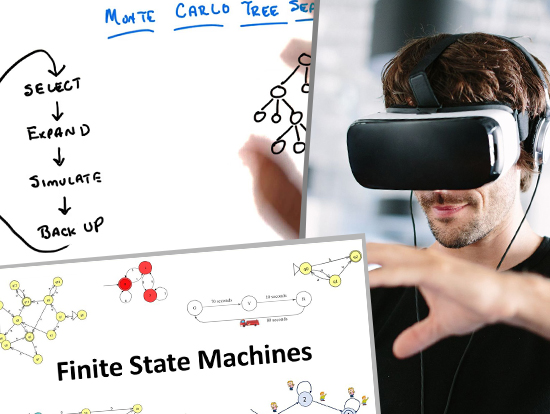 AI in Gaming (FSM, MCST,VR and AR are used in gaming)

If you are an avid gamer then you would have obviously interacted with AI characters and elements. Whether it is racing games like Need for speed, strategy games like Grand Ages: Rome, FPS games like those of Far Cry series you will always find elements of AI. They are among those characters to whom you normally don’t pay that much attention to. Think of all the neutral merchants, animals and so on.  Here are the Gaming AI technologies widely used.

AI games are designed to improve the humans’ gaming experience. AI mostly is used in controlling non-player characters (NPCs). Designers use all their learnt tricks to make NPCs seem more intelligent. Among these tricks is the one algorithm called finite state machine algorithm which was introduced to video game design in 1990s. In the FSM a designer generalizes all the situations that the AI would face, and then programs a specific reaction for each situation. Hence the FSM AI would react appropriately to the gamers’ actions with its pre-programmed behaviour. As an example the AI would attack the player when he shows up and would retreat when its health bar would decrease. In the FSM oriented game, a character can perform any of the four basic actions like aid, evade, wander and attack. Remember that the turtles in Super Mario also have their own FSM design.

Predictability is the FSM’s obvious drawback. After playing a FSM game enough number of times a player may effectively lose interest. MCST(Monte Carlo Search Tree) algorithm is slightly advanced in enhancing the gaming experience. MCST uses the strategy of using random trials in the process of solving a problem. This program defeated the human chess champion in 1997. How it would achieve is that it would consider all possible human player moves and consider all its responding moves and so on. As an analogy you can see all of the possible moves as spread out from a stem which is why we call it search tree. Repeating this process n number of times the AI would calculate the payback and decide the best branch to follow. Upon taking a real move the AI would repeat the search tree depending on the outcomes that are still viable. In games you may consider this as an AI which has an MCST design that can calculate many moves ahead and choose the one with the best reward (more gold, points) and so on.

A similar approach is used in strategy games but here the possible moves are much more than in chess and therefore it is impossible to consider all of them. MCST would randomly some moves to begin with. This only increases the uncertainty from the human player point of view. After the success of AlphaGo machine people raised the question of whether AI could also beat human players at RTS games like Warcraft, FIFA and the like. It may be possible because the AI has considerable advantages than the human players in terms of its ability to multi task and react with greater speed. RTS game designers often deliberately deprecate the AI’s ability to play so that the player can enhance his experience.

As a lead expert in emerging technologies like AI we can say that the development of AI in video games will not focus on making NPCs more powerful such that they can easily defeat human players. Rather it will focus on enhancing the UX.

VR and AR technologies have been successfully been able to blur the lines between reality and the virtual world. We can remember Pokemon Go which combined the real world game with the video game world successfully. Do you know that diabetics used to play Pokemon Go and in turn their health improved as a result? In the coming times, VR and AR-based open world games may give the players with the real world experience unlike they have never seen before. Going by this trajectory humans in the future may not be able to tell whether the other player playing is a human or an AI.

Gaming is our passion. Working with emerging technologies is one among our many fortes. Therefore we keenly observe the trends where AI concepts are implemented in gaming. Adding to the mixture is our expertise of AR/VR which makes us a truly mature company with multiple skill set. Stay tuned to our posts to know more about gaming, AR/VR, Web application development, emerging technologies and more.