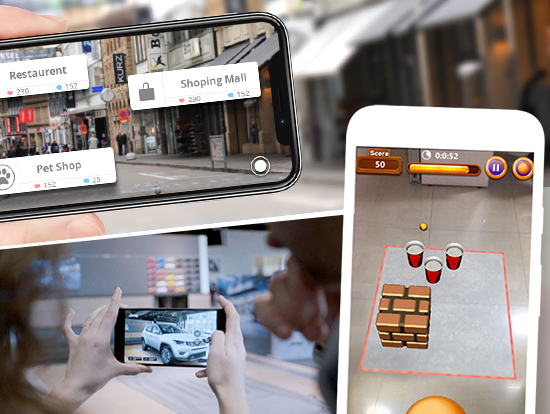 The use of 3D cameras and 3D rendering with device cameras is majorly driving the market of mobile augmented reality technology. In the future, more and more brands of mobile devices and AR devices will focus intensively on market dynamics to give less expensive, highly accurate and fast mobile AR devices and software applications. The mobile AR market is expected to be around $79.77 billion by 2022.

AR will mainly be used in gaming for smartphones and game consoles where the gamers have access to virtual objects and characters. Obviously, mobile AR will accentuate gaming experience with 3D view. AR, as applied to industries, is also going big since they find extensive application in architecture and building design for a 3D view of the construction plan.

Here are some trends which reflect the position of AR&VR in the current scenario and its prospective position in the future:

Convergence of AR and AI:

Apple has released ARKit which allows programmers to come up with AR related applications which seamlessly integrates with Apple devices and apps like Siri. Therefore there is almost an inevitable convergence of AR and AI software, technology and platforms.

The trend of using glasses and headsets will increase day by day. Users will depend on them in keeping them up to date on social media profiles, doing Skype calls and even working with tools like spreadsheets and docs through the motion and gesture detection capability of AR glasses.

The ergonomics of the AR glasses and headsets will certainly need to be evolved for it to reach widespread adoption. AR manufacturers and products will definitely address size and weight issues while making the headsets feel less clunky and cumbersome to use.

As specified above, the trend of AR glasses and headsets will increase and as people more content on them the opportunity for advertisers to market their products will also increase. They will be able to deliver the most relevant ad content to people in real time.

The AR devices of tomorrow will far exceed in their capabilities than today’s AR devices. Future AR glasses will have wider vision field. There will also be significant advances in motion capture, where users can use simple gestures to allow devices to do tasks like give information of the object in front of them.

It is estimated that there will be a revenue of $2.6 billion by 2025 in this sector through AR. A 3D interactive walkthrough can be simulated of a property using a VR headset. You can find out how our AR&VR developers have implemented the reality technologies in real estate.

In this sector it is estimated that about $1.6 billion revenue will be generated by 2025 through AR&VR. According to experts, there is a 71% chance that a customer will shop from a retailer if he AR capabilities for his products. 40% of customers would not hesitate in shelling out more money on a product if it has AR functionality.

There is a revenue forecast of $4.1 billion by 2025. 84% of global population would be interested in AR/VR travel experiences. Almost half of humanity believes that VR/AR is the future of tourism. One can get itineraries; GPS enabled map area, on screen recommendations of the best restaurants along with the sightseeing spots all in the camera view using AR. Juego Studios is one of the top ar development company the elite team of AR app developers. We have developed some of the cutting edge applications and simulations in the field of AR&VR. We have also forayed into WebXR development which supports all kinds of reality technologies. Stay tuned to our blog posts and articles for more on emerging technologies, AR&VR, game technology and trivia, web application development and much more.